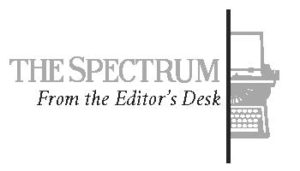 Oh, what I’d give to have a conversation over coffee with Clarence Ohr Follett, the first editor-in-chief of this publication.

We could chitchat about lots of things, like both being farm kids, both working through school as janitors, and just like him, both becoming editor-in-chiefs of The Spectrum.

Clarence, class of ‘98, and his staff of eight launched The Spectrum of North Dakota Agricultural College in 1896.

The first ever paper is a dandy. Its cover story discussed lighting in a pre-electricity world. A writer, pre-Google, inquired why pumpkin and watermelon vines “grow crossways with the row.” Old Main, then known as College Hall, was the paper’s first picture, captured in all its lonely, pre-other-buildings-on-campus glory.

I’d ask Clarence about all of this, along too with The Spectrum’s first printed regrets.

“It undoubtedly, in presenting the first issue, becomes our duty to render an apology for entering the field,” the inaugural editorial reads. This sorry was directed at NDAC’s publications and their coverage of campus, which weren’t accomplishing “what should be accomplished.”

By entering the publication realm, Clarence and company provided the collegiate perspective from the student body’s viewpoint. His staff had to have understood the significance and power of this move.

The student voice is loud and rough, often written hastily and with little forethought for the future. (Future me: Hey! What’s up? Hello! Sorry for writing this at 1:30 a.m. instead of starting that lesson plan.)

This unpolished and unabashed voice needs to be heard, though. The Spectrum operates as a service for students to share their words. And we’ve got plenty to share, hence why this paper continues on as one of the oldest entities on campus.

I am beyond honored to continue serving with this paper. I have huge shoes to fill.

The outgoing editor-in-chief, Erica Nitschke, fearlessly led The Spectrum through what should have been much more tumultuous times. Instead, the boat stayed afloat, and we continued to excel, publishing special editions and receiving recognition both regionally and nationally.

I can promise you my editors and I do not fret over deadlines and neglected classwork for the awards and resume building, though.

We do this because we genuinely care about our university. And when you care about something, you speak up on its behalf — unapologetically.

Hope to hear from you soon.