Fans, and lots of them, filed into Scheel’s Arena despite the bone chilling -15 degree weather at tip off on Saturday. Their perseverance was rewarded.

NDSU thoroughly dominated its rival in the 214th game between the two teams. The Bison have now won 11 of the last 16 matchups. 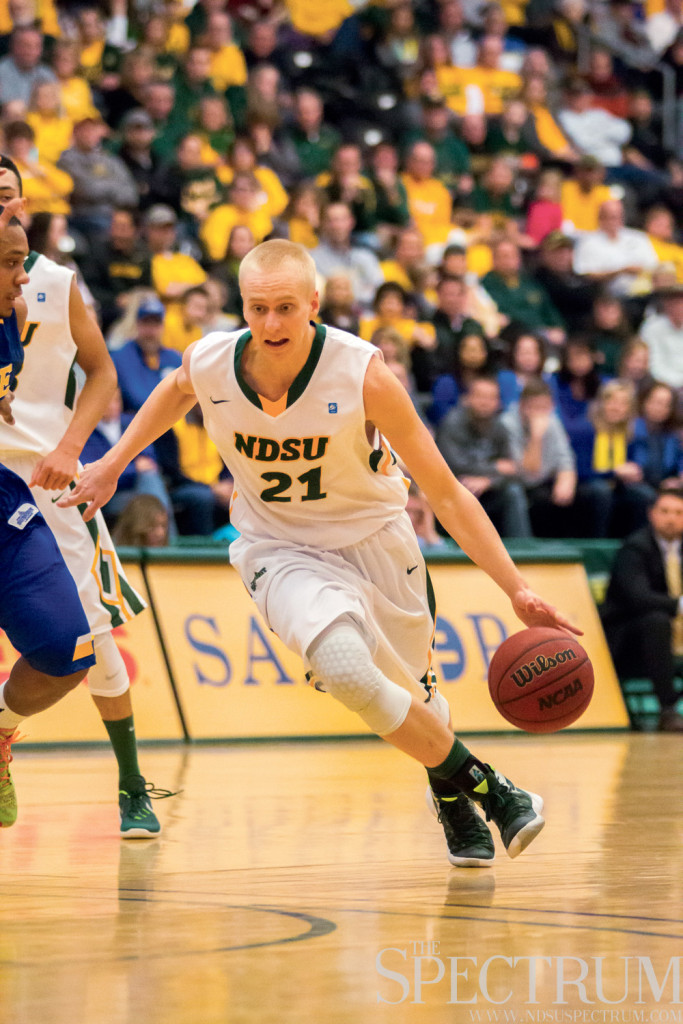 The Jacks led for 14 seconds; NDSU’s largest lead was 17.

“I’m extremely proud of our guys, that’s a very talented team that we just played and beat. I like our group, we’re young and we’re still learning,” head coach David Richman said after the game.

The Bison defense was tough all game long. They held The Jacks to a paisley 19-66 shooting. SDSU also shot an icy cold 18 percent from the three-point line.

“I thought we were locked in; you have to give credit to the big guys, they built a wall and made things difficult for their talented guards,” Richman said.

The first half was all Bison, freshman point guard Khy Kabellis and senior forward Chris Kading hit back to back three balls to put the Bison up 24-11.

Whenever the Bison needed a boost, sophomore Paul Miller would show up for the occasion. He led all scorers with 17 points. As the shot clock was expiring before half, Paul Miller hit a three from what seemed like downtown Fargo. As Scott Van Pelt would say, “In your eyehole!”

The score at halftime was 32-17, but the second half was a different story due to George Marshall of SDSU, who had a team high 16 points, along with a couple steals to add to his nice performance. The Jacks outscored the Bison 40-36 to make the game interesting late.

The bench has been becoming an X-factor for this Bison team. Though it just lost six-man Carlin Dupree, the bench outscored SDSU’s bench 17-2, and as a team, it outscored the Jacks 24-18 in the paint.

With little under a minute left, NDSU led by eight.The Jackrabbits only shot 56 percent from the free-throw line, whereas the Bison shot 70 percent; this ultimately was the difference in the game.

Senior Kory Brown added a physical force to the lineup, scoring 14 points along with 7 assists, 6 boards and playing outstanding defense. His leadership drew praise from teammates.

“Kory has been huge for us. I talked to him before the game and I said, ‘Hey man, we need you now more than ever,’ and he’s done more than that. We have been following him in his ways,” Miller said after the game.

The Bison improve to 13-6 and 3-2 in the Summit League. NDSU starts a two game road trip next week. The first game will be held in Fort Wayne on Thursday.

One Reply to “NDSU Shuts Down Rival Jacks”