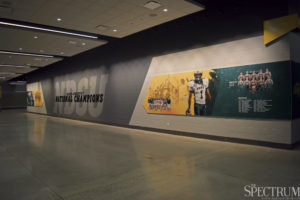 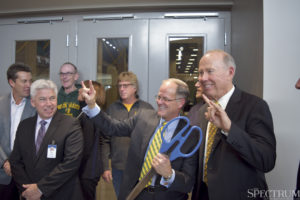 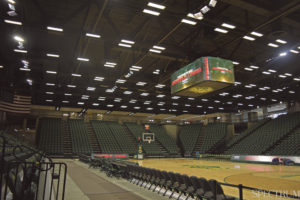 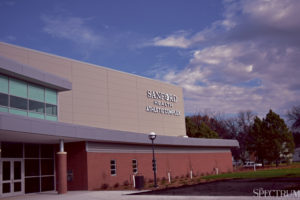 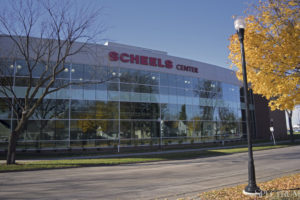 A new era for North Dakota State athletics began last Wednesday as the doors were opened of the Scheels Center at the Sanford Health Athletic Center. The ceremony saw high-ranking officials from NDSU, Scheels and Sanford on hand.

After two-and-a-half years of construction, the SHAC is open for events, which started on Wednesday night when the Bison men’s basketball team hosted Concordia in a preseason game.

The SHAC hosts state of the art faculties for all teams. Included are equipment rooms, strength and conditioning rooms, along with sports medicine and athletic offices.

Those seats ended being a key design feature, and one a key donor took care of. Steve Scheel, son of Scheels owner Fred Scheel, asked about the seats back in a meeting in 2014. When then athletic director Gene Taylor said it would only be a basic chair due to the budget, Scheel made a change to the plan.

“Time out, we’re not going to build an arena opening in 2016 and have cheap seats without cup holders,” Scheel said. So, he added on to his company’s donation to get better ones.

Instead, the seats are nicely upholstered with the Bison logo. It is worth noting though, the student section is absent of those chairs. Instead, for max noise, basic bleachers are used, which makes for easier standing.

Around the concourse, there are reminders this arena is for all Bison sports. The south lobby features the Bison Hall of Fame, with trophies on display. The north end features a Wall of Champions, with each support column dawned with a single sport.

The final cost of the SHAC ended up nearly $50 million. None of that money came from student fees, rather raised through donated funds. The biggest donors were the naming partners, with Sanford donating $10 million and Scheels $8 million.