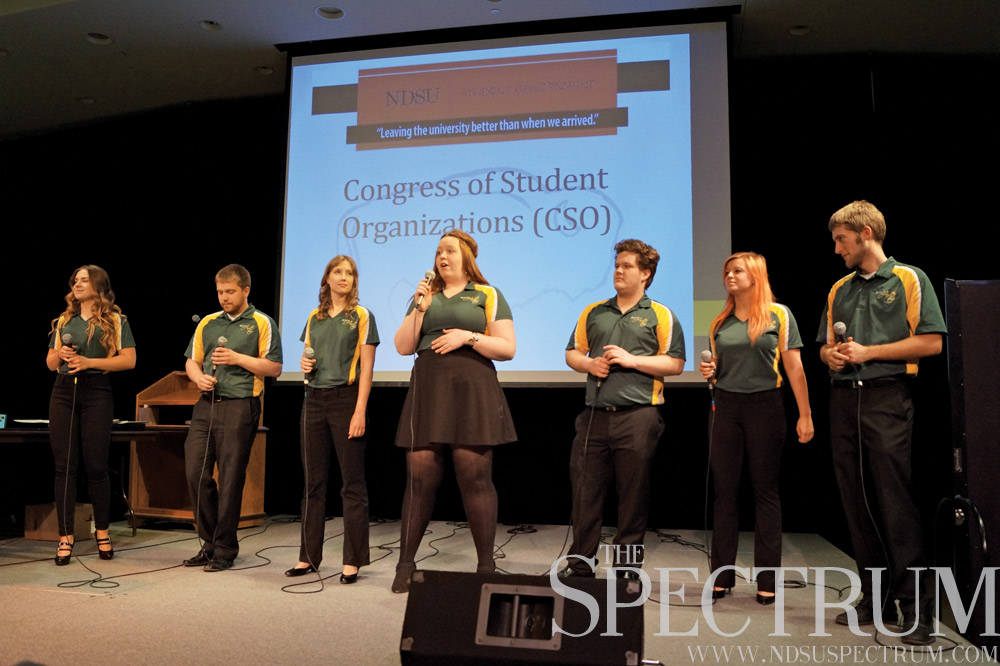 North Dakota State honored students who have demonstrated both exceptional leadership and servitude to the community this year.

This year, the Bison Leader Awards and Bison Service Awards were held together rather than separately as they have been in the past.

Students and faculty filled the Great Plains Ballroom for the annual ceremony. The show started with a bang as the Bison Arts Singers brought a fun energy with performances of Katy Perry’s “Roar” and a mash-up of Journey songs.

Several awards were given out with a handful of groups and students nominated for each of the various awards. Executive Commissioner of the Congress of Student Organizations, Jon Lipp, stressed the difficulty in choosing winners.

The student leader of the year was one of the most difficult categories to judge, Lipp said. CSO broke it up in a male and female category.

“I am really thankful to the student government and all the people from my organization who supported me and all the work that I did,” Omed said. “I really appreciate getting this award.”

Omed had a big night. He also represented the group PAK, which won the student organization of the year for their work putting together Pakistan Night.

Omed was grateful he and his organization were able to push through adversity and claim the award.

“We did not get enough funding for Pakistan night,” Omed said. “But we worked together as a team and pulled ourselves up by our shoes and raised a total of $4,500 in a month.”

As a capstone to the honoring of service, the Sarah Martinsen Award goes to a student who has demonstrated exceptional selfless service to the community.

“I was kind of ambushed by the Sarah Martinsen Award,” Brandt said. “It’s just so good to know the service I am doing is being recognized and making a difference.”

Brandt thanked her friends who recognized all the hard work she put in and were willing to write in nominations for her.

“After they listed all the things that I’m in, I was like, ‘Oh my god, I am actually doing a lot of stuff,'” Brandt said with a laugh.

Like Omed, Brandt also represented a group as well. Brandt collected the award for her sorority, Kappa Delta, for the fraternity and sorority service award.

“I was really surprised, but I had a feeling we were going in the top three,” Brandt said. “It’s kind of surreal that so much could have happened in the matter of a half an hour.”

Student Body President Sarah Russell and Vice President Hilary Haugeberg closed the ceremony with the State of the Student speech. Russell and Haugeberg addressed this year’s successes and gave an outlook into the future. The duo left the audience with a final challenge by asking, “What legacy do we leave behind?”

With a strong turnout of faculty and students, student government officials said it would not be surprising if the Bison Leader Awards and the Bison Service Awards remained conjoined.

“I was very pleased with the number of students that came,” Lipp said. “I would not be surprised if this is a trend that continues into the future.”

In moving ahead, the leaders of student government want to maintain the same levels of excellence in years to come. Vice president elect Josh Fergal wants to make sure he and his team continue with the notion of service and leadership.

“I would just like to see the same level of passion continue,” Fergal said. “It important to remember why I ran (for office) and continue that sense of dedication in student organizations.”