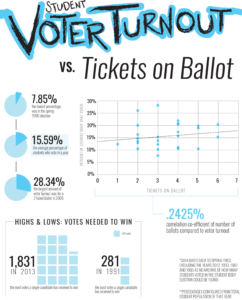 Over 100 student body president-vice president tickets have comprised the ballot of North Dakota State’s highest office for student voters in the previous 40 years.

Of them, there have only been two instances where a ticket has run unopposed. The first instance was in 2013, when Robert Lauf and Eric Diedrich ran unopposed, and the second instance is occurring this year with the Mason Wenzel and Katie Mastel ticket.

Student politicians, including Spencer Moir, have suggested more tickets go along with a higher level of voter turnout from students.

Analysis of student voter data since the spring of 1983 suggests credibility to this statement, kind of. Since those student body elections, the amount of tickets on the ballot is correlated to voter turnout as a percentage of the student body at a value of 0.2425. In layman’s terms, the two variables are weakly related but there is a positive — yet small — relationship with one another.

This isn’t to imply there is no possibility of more tickets causing more students to vote, but the likelihood is smaller as there is a small relationship between the two variables is weak.

An average of 15 percent of all NDSU students vote in any given student body election.

The average number of tickets on a ballot in any given election is 3.23. This comes with a standard deviation of 1.31 and a median of three.

Data from archives of The Spectrum, along with student population information obtained from the Office of Institutional Research and Analysis, was used to tabulate this data.

Years 2012, 1993, 1987 and 1985 were excluded from tabulation as no archive of how many students voted in the student body election could be found.

Archives were found in The Spectrum dating back to the 1971-72 school year, though it was originally decided to only use data from 1977 onward as student body elections used to be held in December, with elected officials taking office in January and remaining in place for the whole year. The spring 1977 semester was the first with student body voting.