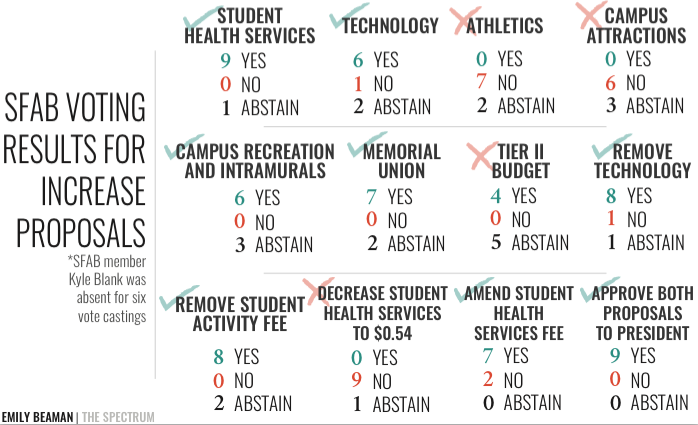 The student fee advisory board approved two options for increases to two campus entities Feb. 4, but SFAB minutes reveal how and what the votes were.

The student activity was fee was not approved to increase, the SFAB ruled, under which included a $1.67 per credit increases from NDSU athletics.

Athletics’ increase proposal, a 35 percent increase from what students have paid since 2014, was voted down 0-7 with two abstaining and one absent.

“This also seems more like a want and not a need. The programs seem to do very well from a student viewpoint,” SFAB member Preston Gilderhus said in the minutes.

“I received a lot of negative feedback from students on this increase,” SFAB member Aaron Feickert said, adding, “The priority points won’t help that much from the viewpoint of the people I know using that system to get tickets.”

Campus Attractions’ increase proposal of $0.02 per credit also failed as SFAB decided in previous years to reduce the amount of future revenue based on enrollment. Campus Attractions was voted down 0-6 with three abstaining and one absent.

The tier II budget was also not approved by SFAB. The increase of $0.26 per credit did not pass by 4-0 with five abstaining and one absent.

Student body president and SFAB chair Eric McDaniel earlier told The Spectrum a simple majority is needed to approve a proposal by the SFAB.

“We have a number of new competitive and noncompetitive clubs. We have so many organizations winning trophies and wining awards. This has needed to happen for a number of years,” Gilderhus said, adding he abstained because he has been working with student organizations for the past two years.”

The SFAB finally decided it would be better to bring two proposals to President Bresciani regarding increases to the Wellness Center’s Aquatic Center addition, student health services and the North Dakota Student Association fee.

SFAB minutes show the board debated needs versus wants and fee responsibility, while continually making changes and that “next year will be a different story” because the Aquatic Center fee won’t be there, McDaniel said.

The two proposals forwarded to Bresciani each detail a $2.26 per credit increase for the Aquatic Center addition and $0.01 per credit for the NDSA fee. Where they differ is in the student health services increase, at $0.54 per credit and $1.50 per credit, respectively.

Jack Dura contributed to this story.