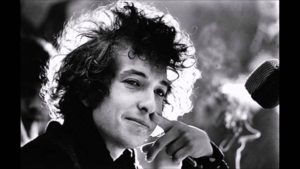 Forget that literature plaque — somebody in Oslo give Bob Dylan the Nobel Peace Prize, too. “Blowin’ in the Wind” is as pacific as Barack Obama and his drones.

Give Dylan the economics ones, as well. His critiques of capitalism have stuck with me longer than any of my 11th-grade econ lectures have.

Dylan, a Minnesota demigod and my personal lord and savior, received the Nobel Prize in literature last week, much to the loathing literati’s disdain.

“What Dylan does,” they say over jasmine tea, “isn’t literature. It’s lyricism. It’s songwriting. It’s music. It can be anything — just don’t call it literature.” Purists use their holey arguments to validate their arbitrary genres, diminishing Dylan’s work as some sort of sub-prose and faux-poetry.

To the haters, I throw the book at you.

Literature, as defined by the Oxford English Dictionary, is “written work valued for superior or lasting artistic merit.”

Definitions are only as definitive, though, as the prescriptivist determines them to be. When they get too loosey goosey, cantankerous critics lose their high-brow shit.

Thankfully, the Nobel committee saw past this pedantic philosophy and finally recognized Dylan “for having created new poetic expressions within the great American song tradition.”

I agree Dylan is different. He’s commercial (as are most authors) and primarily delivers his written work orally.

People get huffy over that last adverb. If he’s so into oral, they say, keep giving him Grammys.

Take a step back, Mr. Jones, and consider the bigger picture.

Alfred Nobel wouldn’t be too keen in this nitpicking. He established the prizes for those giving “the greatest benefit to mankind.” Pretty straightforward and uncontroversial.

Alas, controversy and critics will follow Dylan until his inevitable ascension into heaven.

“Critics have always been on my tail since day one,” he said at the 2015 MusiCares award ceremony. “Critics have said that I’ve made a career out of confounding expectations.”

“Really? Because that’s all I do? That’s how I think about it. Confounding expectations. Like I stay up late at night thinking about how to do it.”

While this debate is juicily joyous — it’s somehow put Alfred Nobel, literature and Bob Dylan into The Spectrum — perhaps we should all take a deep breath and recognize how futile these arguments are. Why should we care, especially since Dylan doesn’t care.

Instead, let’s just marvel at the apparent imploding of artistic terminology and enjoy to the music.