Saul Phillips told his team the biggest thing in a tournament is just survive and advance. His No. 1 NDSU men’s basketball team needs to do that twice to accomplish a goal they set out for themselves in the offseason: win the Summit League Tournament and advance to the NCAA Tournament.

“There are clearly huge advantages,” Phillips said of the bye. “But the one scary part is you’re playing against a team that has won on that court and feels comfortable. I’ll say this, if you make it to the championship round it’s clearly an advantage having played two games in two days instead of three in three days.”

After losing to South Dakota State in the championship game last year, the Bison, with all five starters returning, set out a goal right away to win it all this year. Anything short is not something the six seniors on the roster want to consider.

“We’ve had quite a few goals this year, and some of the goals were to beat a high major, to win the regular season title and now it’s to win the conference tournament,” senior forward Marshall Bjorklund said. “We’ve done two of those goals, but if we don’t win the Summit Tournament, I guess you could say it’s a bust.”

Those expectations are echoed by the head coach. The six seniors on the roster have contributed to the program for the last three years and the regular season wins have increased from 17 to 22 to 23 this year.  The Bison have reached No. 4 in one mid-major poll, defeated Notre Dame out of the ACC and won the Summit League regular season title this year.

But the big goal is still yet to be accomplished.

“I’ve seen them knock out everything on their list of things to do,” Phillips said. “And there’s one big glaring spot on that list and that’s to win a championship.”

Even with two games to do it in, the road won’t be easy. Both potential semi-final matchups pose a challenge for NDSU. USD gave NDSU a scare in Vermillion, S.D., but the Bison barely climbed out with a 66-63 victory in late January. Two days later, conference newcomer Denver defeated the Bison 67-63.

“It’s unusual with potential teams so fresh in your memory,” Phillips said. “Obviously I liked the way we played against both teams here. But you always go back to the game tape and take a look. You want to go in with confidence and I’d say we have it. But I don’t think any of our guys expect this to be an easy road.”

With a week to prepare, Phillips said the two main goals going in are to come out sharp and healthy. Shooting and keeping sharp began early this week while the more in depth game prep began being implemented as the week went along.

Bjorklund said the key is not to change anything a whole lot and to keep the successful routine the same. It will be the dedication and time put in during the offseason that will show results in the tournament. 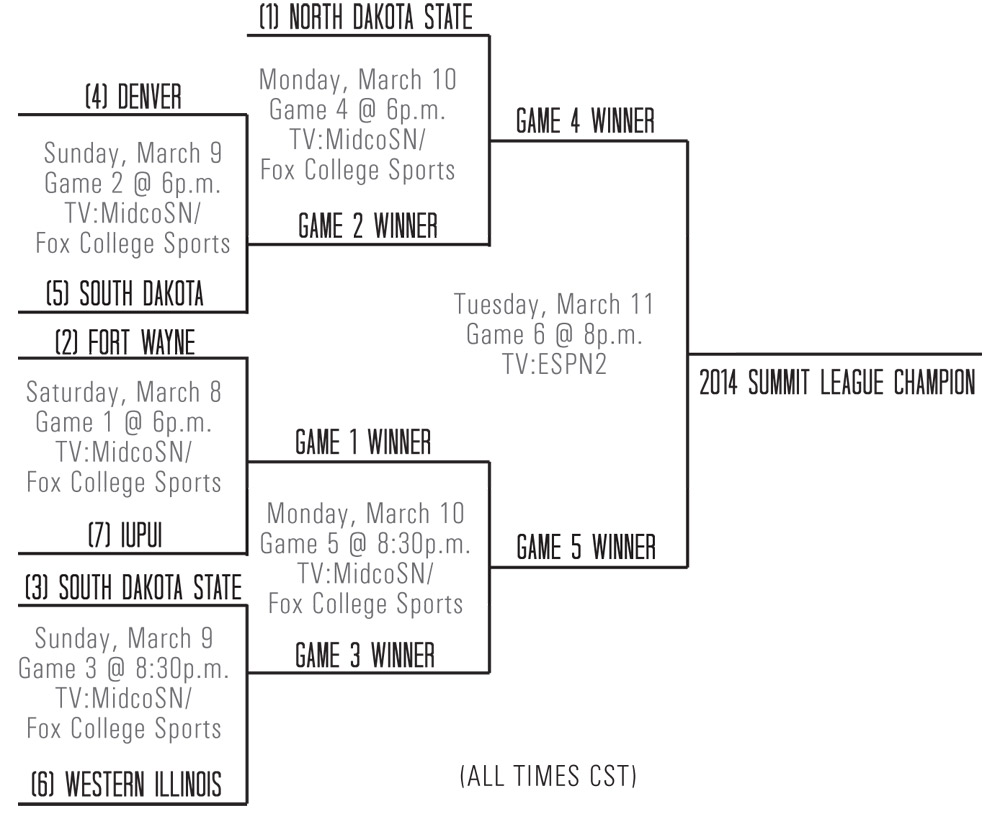 “We like to think that the work we put in will pay off,” Bjorklund said. “It won’t be easy and no one will just give it to us of course. We’ve been playing some of our better ball in these last couple weeks and we hope we can carry that into the tournament.”

Both Bjorklund and Phillips said all the years this group has put into the program seems to be culminating towards this weekend.

“It sure seems like the only appropriate ending to this book is an NCAA Tournament,” Phillips said. “I know this, they put in the work to get themselves right here. And in the present, I really like where we’re at right now. I like our chances, but I’m very mindful that the task here is not easy.”