A long line of students were in front of the Lutheran Center doors a little before 5 p.m. Monday for the ‘Cheesin’ For CASA’ event put on by the Kappa Alpha Theta sorority.

The sorority expected about 500 people to show up to the annual event for nachos and the opportunity to win raffled prizes.

“This event would not have been possible without the help from our wonderful sponsors, community and chapter members,” Chloe Schurb, Kappa Alpha Theta’s chief marketing officer, said. “Our chapter spent two months prior to the scheduled event date visiting different businesses in the Fargo-Moorhead area, asking if they would be so kind to donate food, and/or items, gift cards and other gifts that could be raffled off at the event.”

The total amount of money raised and attendance numbers were not official by press time.

‘Cheesin For CASA’ is the sorority’s main philanthropic event, and all the money raised during the event goes toward the Court Appointed Special Advocates.

CASA for Children is a network of 951 community-based programs that recruit, train and support citizen-volunteers to advocate for the best interests of abused and neglected children in courtrooms and communities.

“Last year, Kappa Alpha Theta chapters nationwide donated nearly one-million dollars collectively towards CASA, and it costs over $1,000 to support each child in need of a CASA volunteer,” Schurb said. “We are proud to support non-profit organizations such as CASA that continue to better our community and help find safer living environments for children in need. We enjoy hosting these types of events, not just because they are fun, but (also) because it is rewarding to give back to our community.” 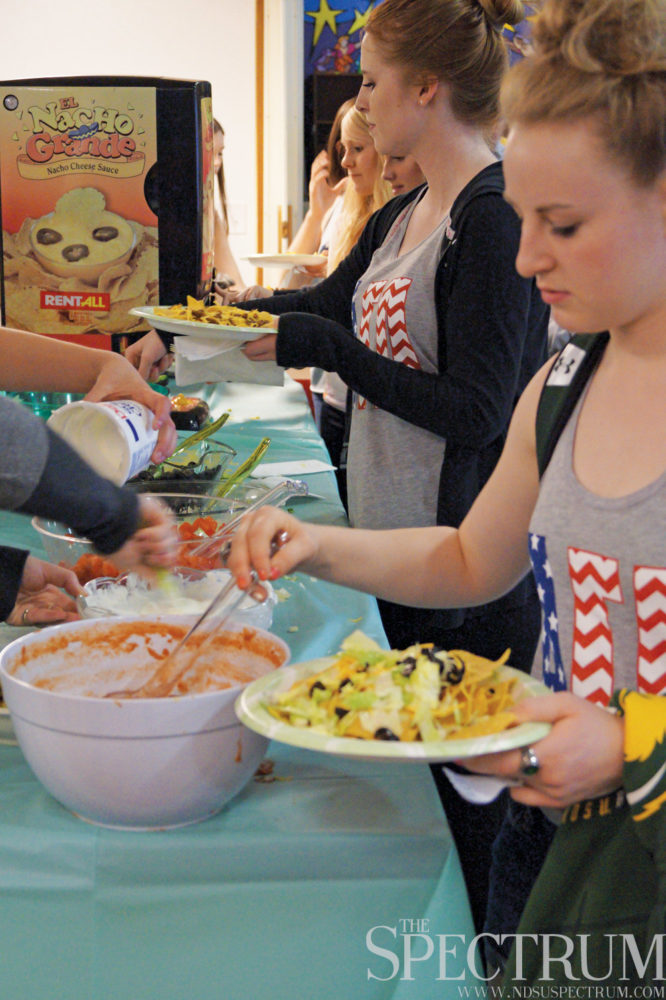 Schurb said members of Kappa Alpha Theta spent multiple hours putting posters up around town and campus, while trying to sell as many tickets as possible to the community.

Kim Morris, the philanthropy director of the sorority, was all over the place answering questions about the event, taking phone calls and checking up on the food during the event.

“It’s a lot of work that requires months in advance to plan out,” Morris said, “but with help, it was a success.”

Schurb, who managed marketing for the event, said she and the Kappa Alpha Theta sorority are thankful to have the support they did from the Greek community at North Dakota State.

‘The vast majority of ticket sales from our nacho feed come from members of NDSU Fraternity and Sorority Life,” Schurb said. “But it’s always humbling to know how much this community truly supports us and our efforts towards a successful philanthropy, regardless of our letters.”

This event started in 2009 and has taken place every year since. Schurb said the event is a tradition for the chapter.

“Since everybody loves to enjoy a heaping plate of nachos, our chapter decided that a philanthropic nacho feed would be a fun idea,” Schurb said. “We have seen continued success with our event since the start of the tradition.”