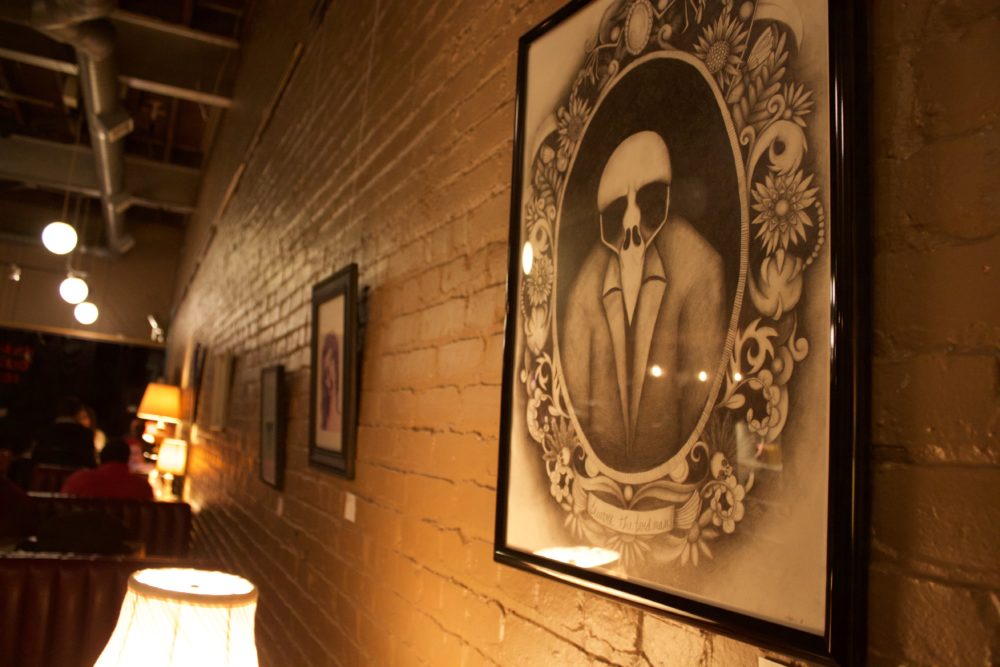 Local horror artist Morganne Behl displayed her artwork at the Red Raven Espresso Parlor on the evening of Oct. 26, just in time for Halloween.

Dressed in a blazer reminiscent of Jack Skellington’s iconic attire, dark eye shadow and lipstick the oxidized color of dried blood complete with drip trails down her chin, Behl definitely looked the part for her first art show featuring her brand of artistic horror.

Perusing the walls of the Red Raven while sipping on one of the event’s themed drinks, you would never guess all the pieces only recently came into existence. “I didn’t really get back into (art) until earlier this year,” Behl said. “This one isn’t displayed because it didn’t quite turn out the way I wanted, but I did a drawing of Taylor Swift as Medusa and that’s what really got me back into it. This is the culmination of the past eight, nine months of work.”

As with any creative endeavor, a strong support system can heavily influence its trajectory of success. Luckily, Behl seems to have a large pool to draw support from, composed of friends, family and even her boss at Microsoft, the later of which Behl is currently working on a commission of Pokemón characters for his son’s room.

This wasn’t always the case, as Behl’s former boyfriend greatly contributed to her hiatus from horror art. While she stressed she holds no grudge against him, his discomfort with her dark artwork and negative view of tattoos and piercings stifled her creatively. “I did a picture; it was the Alice in Wonderland tea party, but they were eating Alice. Whenever I would go off into stuff like that he would just get very uncomfortable … he is very traditional … and he would always kind of encouraged me to stay the normal course. I broke up with him at the beginning of the year and pierced my nose, cut all my hair off and I’m getting my first tattoo tomorrow. Now I have a horror art show. I’m living my best life.”

When discussing her inspiration behind her work, Behl explained,”I get a lot of inspiration from songs. Specifically ‘The Ethereal Queen’ over there is inspired by the song ‘Saint’ by VÉRITÉ.” Pointing at a piece I had been eyeing, she continued, “The honey nosed lady ‘Prologue’ is inspired by ‘Prologue’ by Halsey. There is a line that goes ‘I’m the child of a money hungry, prideful country/ grass is green and it’s always sunny/ hands so bloody, it tastes like honey/ I’m finding it hard to leave.'” Some of her other pieces, such as her largest piece “Eviscerated (Eve)” and a small piece “Nine of Cups (Smug Man),” occurred through flash bulb images of what Behl wanted to do.

Currently her work is only on her Instagram, but Behl is hoping to have a website up and running in the next few weeks. Until then, those interested in commissions or purchasing her artwork can send her a direct message through Instagram. “I’d really love to do more commissions,” Behl enthused.

She is also ordering prints of “Eviscerated (Eve),” “Beware the Birdman,” “Prologue” and “Aphrodite” that will be available to purchase in the near future.