With the rise of social media features on the nuances of locals in a variety of areas, NDSU students will now have their chance to have their voices heard and their faces known. Welcome to Humans of NDSU.

Abby Debner, a graduate student in the horticulture program, was caught practicing studious behavior near the Memorial Union. Humans of NDSU asked how she was preparing for the final push of the semester.

“My best advice would be to take multiple study breaks outside,” said Debner. “Break it up, and don’t cram – prepare early.”

The graduate student has another year left of school and hopes to work in a greenhouse upon finishing her degree.

Segway enthusiast Connie Norheim caught the attention of Humans of NDSU while she was gliding around campus.

Her partner Lew Dailey is a volunteer and mentor in the mechanical engineering building, and together they have been Segwaying for over eight years.

The former nursing instructor took time from her ride to further explain her affinity for the two-wheeled vehicles.

“We had wanted them for years. We met the guy who invented them – he was here at NDSU. They offer a Segway tour in St. Paul that takes riders down along the river.”

Norheim and Dailey offered to buy the machines, and after mild hesitation, they had two Segways packed into the back of their Honda.

She has only taken a few tumbles in her riding career, one particularly nasty fall near Johnson Boulevard while she was going full-speed.

When asked about the prospects of Segway Share, Norheim laughed but noted the high expenses and said the likelihood of NDSU adopting a Segway program was low. 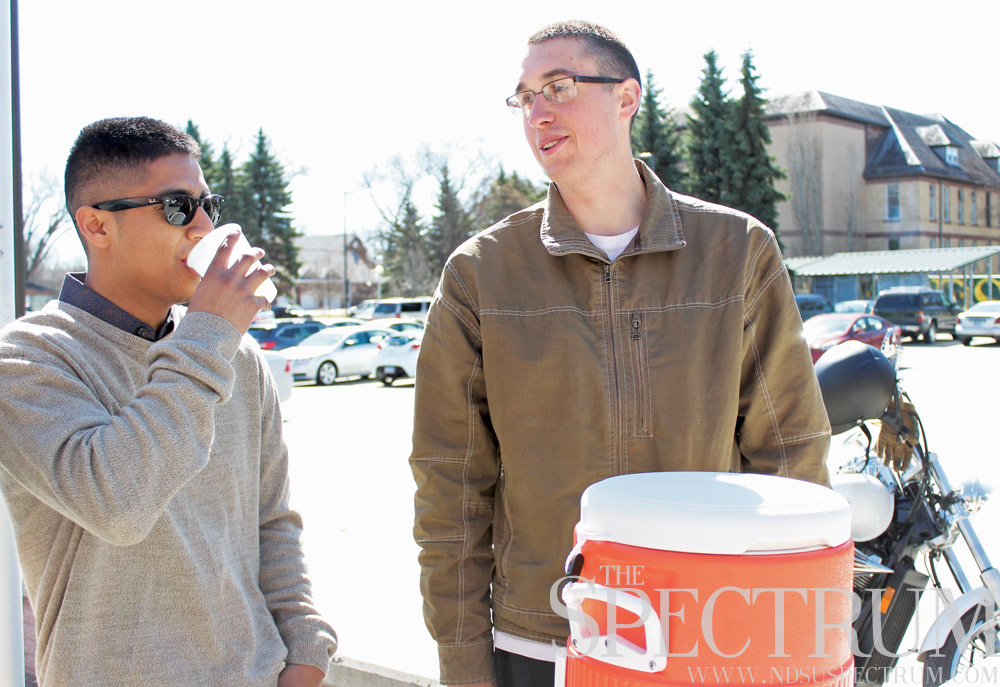 The onset of spring has allowed student activities to spill outdoors onto the Memorial Union south entrance.

Humans: Can you guys tell me a little bit more about what’s going on here?

Humans: What are some other examples of recent philanthropy from your organization?

Ortiz: Last fall we went to this old lady’s house and helped rebuild her garage.

The duo also mentioned a project completed during the holiday season that involved providing and decorating Christmas trees for lower-income families. Most recently, Sigma Alpha Epsilon assisted at the YMCA’s egg-stravaganza over Easter.

Ortiz: We figured people walk around campus and might be thirsty.

Knezovich: I’ve never met a person who doesn’t like lemonade, and it’s awesome. 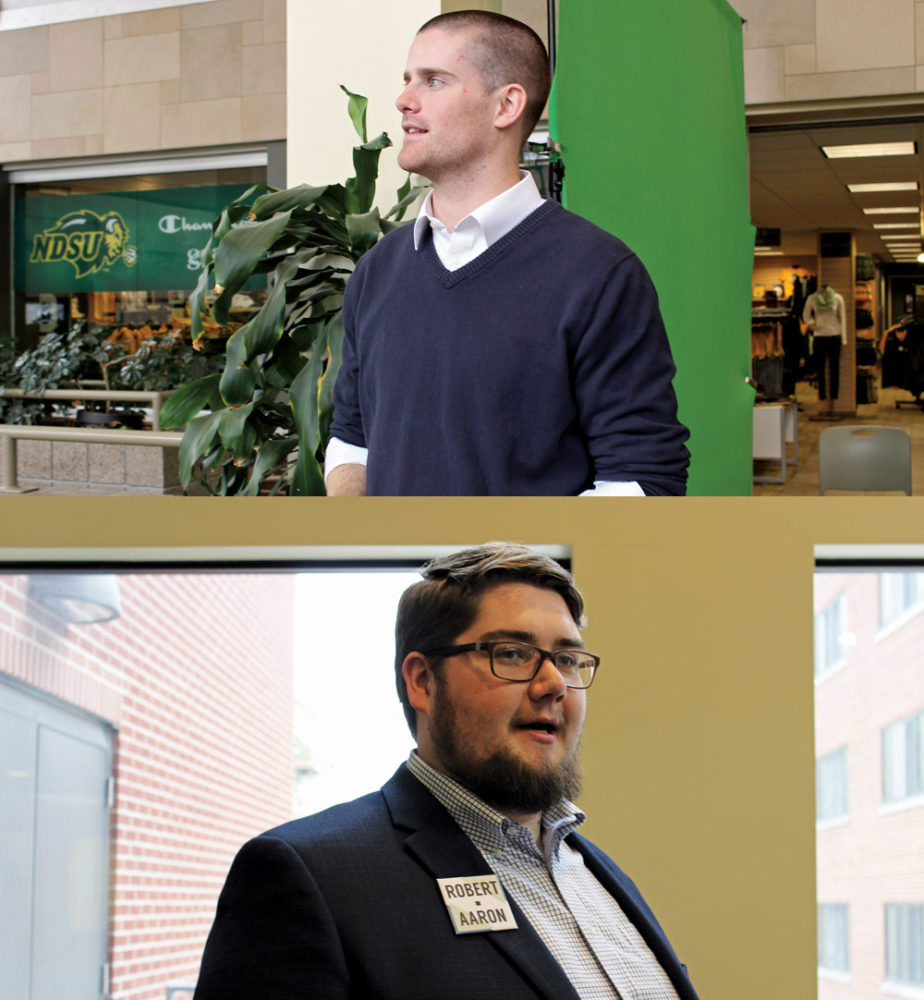 Humans of NDSU had the opportunity to catch up with both student body presidential candidates,
Robert Kringler and Eric McDaniel. Both young politicians were asked, “What is your favorite
quality in your running mate?”

Eric McDaniel (top):
(Running mate, Josh Fergel)
“Probably how well we can tie jokes together and just go back and forth and have a good time. We always tell people we’re triplets because he has a twin, and then I like to throw myself in there.”
“The biggest thing is how we can joke together … Being able to relax a situation with our humor is my favorite aspect of our relationship.”

Robert Kringler (bottom):
(Running mate, Aaron Weber)
“We balance each other well. He’s very detail-oriented, he nit-picks small details, where I’m definitely a bigvision guy. So it’s nice to have him by my side.”
“He’s kind of just a goofy guy too. He’s actually my roommate right now. We always make fun of him because he’s from Wishek, which is probably the most German part of North Dakota, so he’s always eating knoephla and noodles and sausage. We always joke when I come back to the apartment that he’s always making some sort of red meat and noodles.”
“I appreciate his very thick German heritage and how it always makes our apartment smell like meat.”

Michael Stottler, a freshman architecture major and student employee, expressed his investment into the program he will be applying to this spring.

If you weren’t majoring in architecture, what would you have chosen?

“That’s a good question. If it’s not what I want … I’ll have a lot of soul searching to do. I’m banking on it right now.”

If there’s one thing you could have written or printed about you, what would it be?

“I’m looking for jobs, is that acceptable? (laughs)”

Emily Knilans is a senior at North Dakota State majoring in elementary education and human development and family science. She is on track to begin student teaching at Longfellow Elementary, but education was not always her goal.

“My mom worked in a school, and I didn’t like the bureaucracy of it, so I really didn’t want to. But it’s what I’m supposed to do,” she said.

Her experience from various practicums has bolstered her opinion toward her career choice.

“It reinforces that it’s what I’m supposed to be doing. I’m happiest when I’m with the kids,” she said.

Rachel Grider, a fourth-year English major with an emphasis in linguistics, shared both the challenges and triumphs she has encountered in her final year of studies at North Dakota State.

“This year has been a bit of an adventure — a lot of good and a lot of bad. I just got back from living in Europe, so that was good. But the main thing for me this year is that I got diagnosed with an anxiety disorder, which has thrown my ideas of being a lecturer up in the air.”

Grider ended the conversation with a sense of positivity regarding her condition.

“ … you can’t let it control your life, but it is also something that’s forever a part of you.”

Have you guys set any goals for this semester?

“First, I want to lose some weight. Second, I want to be able to speak in English as my other language,” said crop science and political science major Daham Moon.

Industrial engineering major Hakjae Shin chimed in after, “My goal here is to build a sense of communication. In South Korea, there are mostly Asian people, so we have no experience in meeting foreigners and other people from different countries.”

He continued, “When I first got here, meeting foreigners was strange for me. But after time passed, I think it’s cool, and I can learn from their different experiences and thinking.”

In Humans of NDSU round two, a dead week focus is applied as we came across Erin Donner in the library preparing for her final tests and exams. She is a junior majoring in marketing, as well as obtaining a professional certificate in sales.

Currently, what is your biggest focus?

“I would say my biggest focus right now is school, finishing up final projects and preparing for tests in a way that will positively affect my grades. Also, getting everything done on time.”

Next, she was asked if there are any hindrances to her academic focus. She noted that work and social obligations can provide distractions at times, but her motivation for success keeps her on track.

For round one of "Humans," Brian Kaeter, a senior majoring in Geology, was in the Memorial Union, and answered this question:

“What is the most valuable lesson you’ve learned at NDSU, thus far?”

After a few moments of contemplation, Kaeter responded with: “… I would say, keep moving forward.”

Next came the question of where that knowledge was developed. Kaeter said, “Well you know, everyone has setbacks; you’ve got to keep moving at it.”