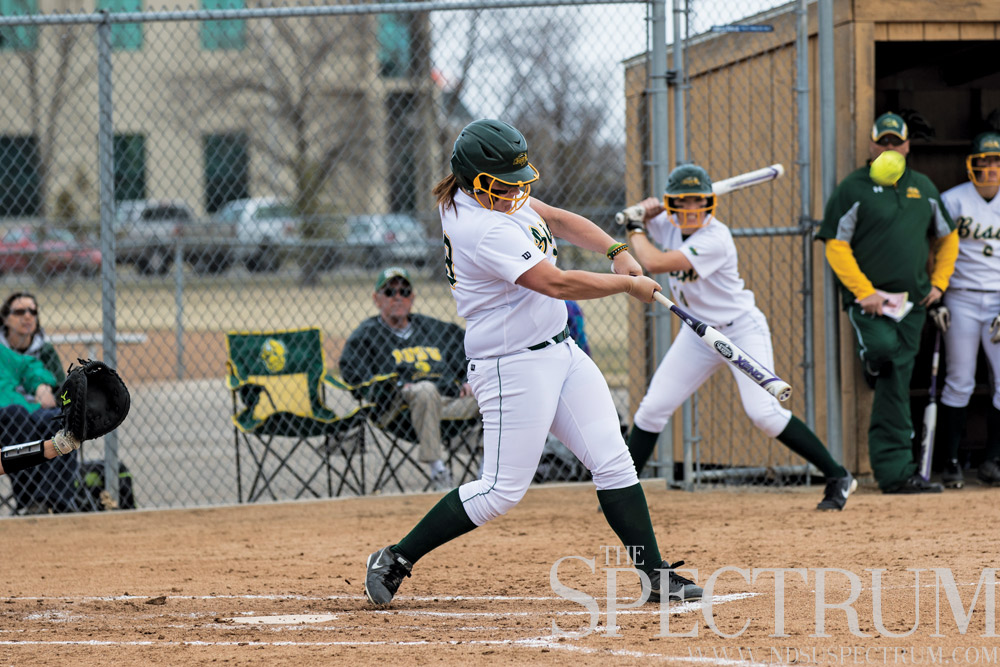 Amanda Grable isn’t the most respected player for North Dakota State softball because she verbally demands it.

Her play does that for her.

However, Bison catcher Alyssa Reina said Grable’s attitude doesn’t show off the talent.
“I’ve always looked up to her because she’s such a silent assassin almost. She’s so good, but she’s so modest,” Reina said. “I love that she hits behind me because I know that if I don’t get the RBI or if I just get on base, I know she has the skill, potential and mindset to get someone in or get a base hit. I always trust her no matter what.”

On her way to helping the Bison to a conference championship her freshman year, Grable was named to the All-Summit League first team with a .269 hitting percentage while tallying nine home runs and 29 RBI. That year, Grable recorded her career best two home runs in a single game against Indiana-Purdue of Indianapolis.

She did it again to IUPUI two weeks later.

“My biggest thing is to have fun,” Grable said with a smile. “If you win and don’t have fun, then it doesn’t really matter anyway. You always want to have fun, especially when we play like we know how we can play.”

Grable was a member of the second all-conference team after her sophomore year in which she improved to a .273 batting average with a .525 slugging percentage, 32 RBI and 10 home runs.

Since coming onto the team from Santee, Calif., Grable has given the rest of her team’s batting lineup confidence. Even pitcher Krista Menke goes after batters more aggressively knowing that Grable can offensively reply if batters get hits.

“It just gives you confidence and it makes you go right at your hitters because if you mess up even a little bit they’re right there and they’re going to put runs on the board for you,” Menke said. “You aren’t afraid to make a mistake because you know your team is there to back you up.”

Last season, Grable improved again to a .323 batting average with a .559 slugging percentage, 48 RBI and added another 10 homers. Grable was named to the Summit League All-Tournament team as the Bison made yet another championship run. The Bison won their opening round of the NCAA Tournament over No. 21-ranked Auburn before losing twice on their way to elimination.

This season, Grable has a .440 batting average with 40 RBI and a .632 slugging percentage to boot.

Grable has the second-best hitting percentage for the Bison (35-7, 13-2 Summit), yet co-head coach Darren Mueller has Grable as the third batter in the lineup.

That’s not a knock against her though, Mueller said. In fact, he said her team needs her there.

“If you look at her numbers, obviously she’s crushing the ball, so people might think I would be crazy for having her hit third when she’s batting around .450,” Mueller said, “but there’s just a kind of stability in our lineup that she can bring and I think that’s something the rest of our lineup feeds off of. That’s comforting to know that hey, Amanda is coming up in the lineup and she’s going to make something happen.”

Bison co-head coach Jamie Trachsel said Grable is one of the smartest players to ever wear a Bison uniform.

Grable was named to the Summit League Winter/Spring Honor Roll the past two years to prove her school smarts.

And she’s helped her teammates a long way to prove her softball smarts.

“She’s so good at picking things up and relaying information to the rest of the lineup,” Trachsel said. “To be able to have a senior who’s anchoring the top five hitters that we have with her confidence and composure and intelligence and ability to make adjustments and hit on both sides of the plate, it’s tremendous and I think that’s why we’ve been able to put up some of the runs we have and scored in so many different innings.”

If NDSU were to make — and win — the Summit League tournament for back-to-back titles, Grable will have won three conference championships, beaten numerous nationally-ranked teams and have secured plenty of awards for her play.

Even though she’s not really picky on how it’s all done.