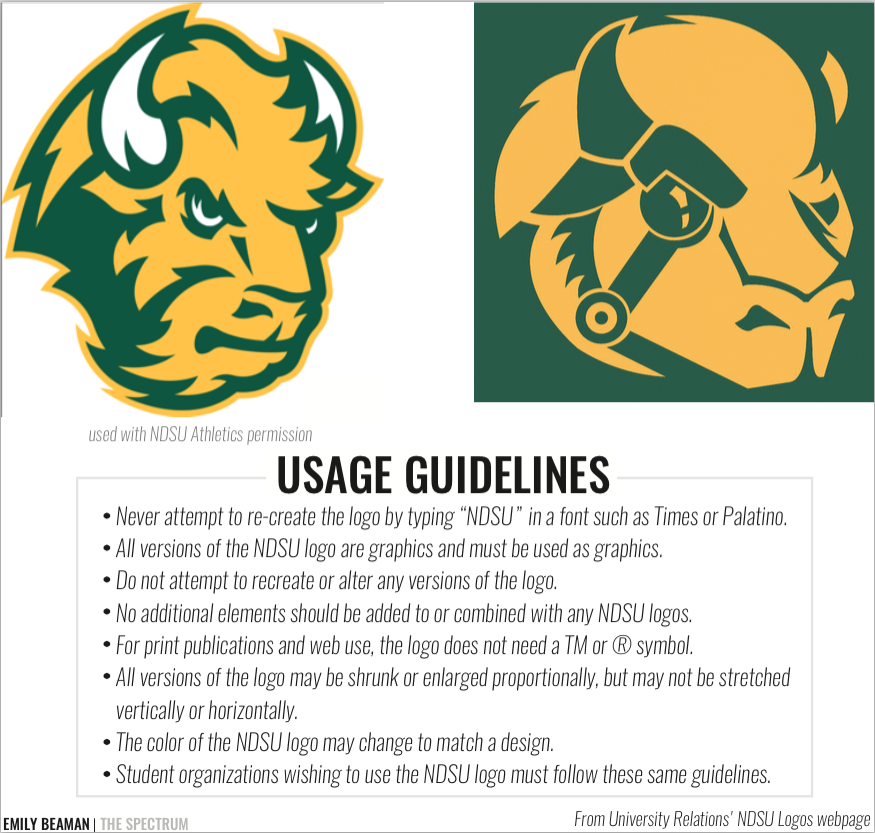 North Dakota State’s symbol is the bison, but not just anyone can use the university’s official symbol.

The Bison Robotics club recently changed its logo, which campus officials said appeared too similar to NDSU’s official bison mascot logo. A clothing merchandise company told the club the logo was too similar.

“When we went in to make clothing, they did not think it was acceptable and suggested we talked with university relations on options for a different logo,” said Tyler Peterson, Bison Robotics team president.

He added that the organization did not inquire about university policy as to logos’ formats.

The former logo was in place since April.

“We had no idea that it was violating NDSU policy,” said Majura Selekwa, Bison Robotics adviser.

Club members sketched up a new logo with the help of the NDSU Library’s publication department.

NDSU Athletics established the familiar logo of a green and yellow Bison head.

“Bison mascot logos are trademarked and are the property of Athletics,” said university relations’ official NDSU logos webpage. “They are to be used only for materials related to Athletics, or with permission from Athletics.”

The webpage also lists eight usage guidelines for official logos of the university.

“All versions of the NDSU logo are graphics and must be used as graphics,” the webpage includes as a usage guideline.

Other guidelines include not attempting to recreate fonts, not adding or combining additional elements to the logo and not stretching the logo horizontally or vertically.

“Student organizations wishing to use the NDSU logo must follow these same guidelines,” the final guideline reads.

Bison Robotics now has a fully approved logo that can be used for all aspects, including its biggest sectors of fundraising, competitions and graphics.

The organization does many service events related to robotics and competitions including two major trips this year in Minnesota and at Florida’s Kennedy Space Center.

“We are a rookie’s team, but I see great things in our future,” Peterson said. “We are always working very hard and are excited to see what our events and competitions bring to us.”

The organization meets every other Monday; however, the specific completion teams with the team meet much more frequently to practice for competitions.

Along with selling baked goods recently, Bison Robotics is hosting a fundraising event on campus in November.