A person starts to feel some type of way as the month of March approaches.

Like all jittery, and nervous and excited, all in one. 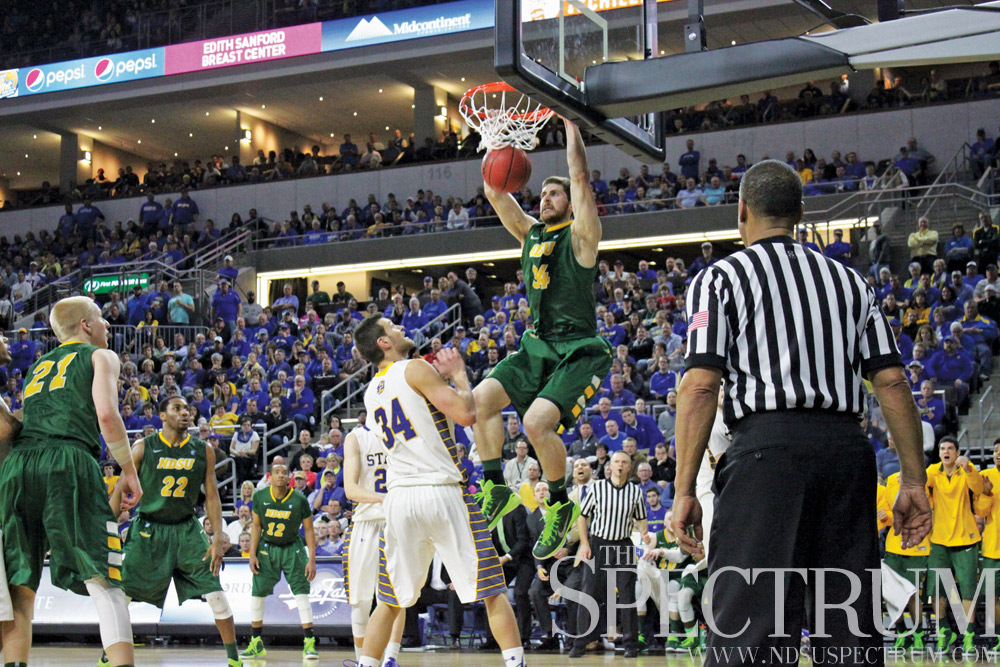 “It’s March Madness, baby” as Dickie V would say in his annoying voice.

A league with so much parody, the Summit League Tournament could be full of surprises this weekend.

Yes, Indiana Purdue-Fort Wayne is the No. 1 seed, and yes, they did finished tied for first in the regular season standings. Yet North Dakota State held the champs to 46 points on Feb. 6.

Yes South Dakota State is the No. 2 seed, and yes, they finished the regular season atop the Summit League, but they also lost to the Bison by 11 on Jan. 16 in Fargo.

We can play the this-and-that game all day, but this is tournament time and all eight tournament teams regular season records mean as much as Aaron Carter — irrelevant.

Yeah, NDSU is on a two-game losing streak heading into the most important weekend of the season.

And yeah, the Bison have struggled away from Fargo and Scheels Arena, but that is all in the past now — just like Aaron Carter’s career.

“I’m just ready to get there and get to it,” Bison senior guard Kory Brown said about his last Summit League Tournament trip. “I want to put it in my guys that, a: it’s a clean slate … we have three games to play to get it done.”

NDSU will take on Indiana University Purdue University of Indianapolis at 6 p.m. Sunday inside the Denny Sanford Premier Center.

The Bison have been pretty darn successful in Sioux Falls, S.D. over the last two years, going 5-0 in Summit League Tournament games.

Not to mention the 1-2 record in the NCAA Tournament over those two years, which doesn’t look too good on paper but in reality it’s pretty great for a mid-level team from North Dakota.

The Bison definitely don’t have momentum heading into the tournament but the green and gold do have postseason experience.

“I don’t know, I mean this is a new team, a new year. We are playing against new guys on those rosters, I think there is definitely some things we can lean on from past experiences,” Richman said about a slight tournament edge in his team’s favor. “(But) that being said, we have to go and write this chapter for the 2015-2016 season.”

NDSU will have to slow down IUPUI’s junior guard Darell Combs, who Richman said is playing “as well as anybody in the league” right now.

Combs posted 21 points and 17 against the Bison in two games during the regular season, so he is going to get his shots, Richman said, but it all comes down to the hustle plays.

“I wish I could tell you,” Richman said about the X-factor for Sunday’s game. “To us, this time of year it’s energy, who’s going to be willing to get the 50-50 balls. That’s what tournament play comes down to.”